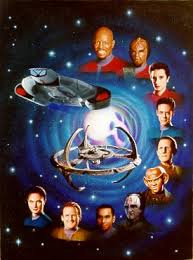 On January 3, 1993, Star Trek took a turn into a darker, grittier place with the premiere episode of Deep Space Nine. The pilot episode, “The Emissary,” introduced us to a Commander who hated Picard and was looking to retire early, an ex-terrorist turned first officer, a 700 year old Science Officer, a shapeshifting security officer, a morally challenged barkeep, and a slew of others that, frankly, did not get along.

What emerged was a show that was the first Star Trek not created by Gene Roddenberry. In fact, before his death, he was pretty pessimistic about it. Gone was the doe-eyed optimism of his original vision of the future and replaced with the harsh realities of war, occupation, and…well…life.

So, twenty years later, what’s your take on DS9?