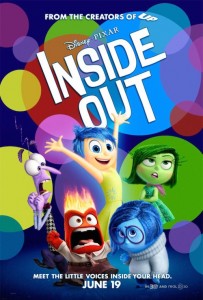 After taking 2014 off, Pixar returns with two films this year (a first for the company). The first of which is a look inside the head of an eleven-year-old girl, Inside Out.

Their second film of 2015 is The Good Dinosaur and debuts in November.

Growing up can be a bumpy road, and it’s no exception for Riley, who is uprooted from her Midwest life when her father starts a new job in San Francisco. Like all of us, Riley is guided by her emotions – Joy, Fear, Anger, Disgust and Sadness. The emotions live in Headquarters, the control center inside Riley’s mind, where they help advise her through everyday life. As Riley and her emotions struggle to adjust to a new life in San Francisco, turmoil ensues in Headquarters. Although Joy, Riley’s main and most important emotion, tries to keep things positive, the emotions conflict on how best to navigate a new city, house and school.

I am seriously struggling to come up with one. It’s not a Pixar fanboy thing, the movie was just completely solid start to finish. I might be able to come up with something after a second viewing.

Originality: 5/6 The concept has been done before with Herman’s Head. However, this film takes the concept and makes it its own.

Animation: 6/6 Beautifully done animation of the world inside Riley’s head. The use of light and color to affect mood and story is brilliant.

Story: 6/6 The film eases you into the concept and then is off a good pace. The dialogue is snappy and the message at the end is a powerful one.

Acting: 6/6 Docter and company have done a fantastic job of casting this film. The five emotions are spot-on. Sure it’s obviously Lewis Black being Anger, but who else would you expect playing that emotion?

Production: 6/6 Docter knows how to tell a compelling, emotional story. His last film, Up, was one of my favorite films and this is no exception. Michael Giacchino’s score is wonderful (his fifth for Pixar) and helps to drive the story forward.

Emotional Response: 6/6 Damn but my theater was dusty. I mean they had to be pumping in extra dust to out seats. Seriously though, it was emotionally powerful. The only person in my family not blubbering by the end was my son, who is Aspergian. And even he walked away with a new understanding of how emotions can drive our brains and could relate to a lot of what was going on.

Overall: 6/6 Seriously, this is a masterpiece film. It does for emotions what Monsters Inc. did for childhood fears.