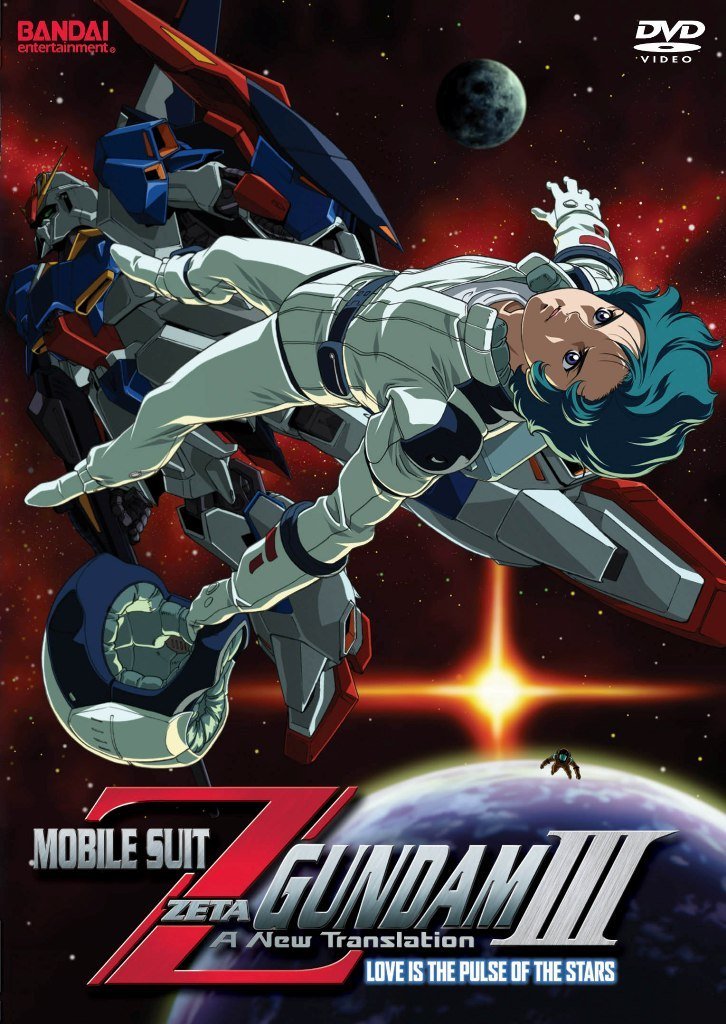 We come at last to the conclusion of the Zeta Gundam compilation movies, with perhaps the most long-winded title in the franchise as yet.

The Earth Federation has cut its ties with the Titans, and now a race is on – to see whether the AEUG or the Titans can ally with Neo Zeon, lead by Haman Karn (with Minerva Zabi as her puppet) first. Meanwhile, political maneuverings are happening within the high command of the Titans, with The Man From Jupiter, Paptimus Scirocco, seeking to wrest control of the Titans from Bask Om and Jamitov Heimann.

While we get a more equal mix of footage from the original series and new footage in this film – particularly in action scenes – enough money was put into these action scenes that having the footage zoomed in doesn’t have as much of a jarring shift in quality. The shift is there, but the footage doesn’t look bad, necessarily.

The ending of the series has also been changed significantly from the conclusion of the show. In the series, Kamille still kills Scirocco by ramming his mech with the Zeta Gundam. However, Scirocco gets the last laugh by destroying Kamille’s mind with his own Newtype abilities, leaving him and Fa Yuiry out of action for the following series, Gundam ZZ, (Kamille an invalid and Fa as his caretaker) making way for a new protagonist. By contrast, because we aren’t necessarily getting a similar group of compilation films for Gundam ZZ, that ending would be a bit too harsh. So, instead the psychic forms of the deceased women of Kamille’s life – his mother, Four Murasame, Emma Sheen, and Reccoa Londe return to give him the power he needs to best Scirocco. This does have a sort of weird implication of Kamille’s strength also showing the strength of his ideology, but under the circumstances, and given the thematic elements they’d been trying to depict, I can cut them some slack on this front.

Considering the delay in the making of the compilation film, and the need to have more of a stand-alone ending, I’d consider this change to be maybe not a change for the better, but a reasonable change, and one that’s executed well.

Some characters do some really stupid things in this move. Some of these things are called out, like Kamille opening the visor on his helmet in vacuum to talk to someone. However, there are others that make no sense, and which aren’t called out. In particular, there’s a moment where, after Emma Sheen has taken out Reccoa Londe (who has returned to the Titans), Sheen opens the cockpit of the Gundam Mk. II to float outside for a minute, in a free fire warzone. Near as I can tell, the only reason she does this is so, when the reactor on Reccoa’s mech goes critical, shrapnel from the explosion can hit Emma and kill her, in a fashion that’s just slow enough so Kamille can take her to a ruined ship right in front of the Colony Laser, where she can give an inspirational dying speech face-to-face with Kamille, before he leaves to take out Scirocco.

The amount of excised material from the series makes Haman Karn’s political maneuverings seem more like she just has a reflexive urge to backstab people instead of having an actual plan. In the material from the show, it’s a little more clear that she has a plan she’s working on to weaken or eliminate the Titans and the AEUG and either seize the Colony Laser for Neo Zeon, and if they can’t get it then to destroy it.

Similarly, both this film, like the TV show, almost completely forgot about Jerid Messa. In the portions of the show covered by the earlier films, Messa had the unfortunate habit of having squadmates or love interests who ended up being sent on missions against the Zeta Gundam by Bask Om, and leading to the deaths of those love interests. This in turn lead to Jerid having a personal vendetta against Kamille. After a portion of the show where Jerid slipped to the back burner, when he came back, to the show’s credit, it did a decent job of reminding the audience of why he hated Kamille, through dialog. However, in the film, Jerid just shows up with with Ax-Crazy Titan pilot Yazan Gable, and after the two of them destroy the Radish and kill Katz, Kamille gets in a rage and takes out Jerid in about 5 seconds.

Also, not only does Gable not get his in this movie, but I checked online and the f***er survives the freaking Universal Century Gundam franchise. (*goes off to mutter profanities*)

Originality: Still and adaptation, but one which has a significant changes regarding the ending. 4/6

Animation: The new animation still looks great, and I’m actually noticing some little details with the older stuff that I didn’t see on the DVD releases of the series (particularly related to little details on the animation – stuff like a “Warning: Beam Saber” sign by where the hilt of the Beam Saber comes out). 5/6

Story: The refinements to the story are nice, but there are still some significant holes that are left by the cutting. 4/6

Acting: I did not notice that Kaori Shimamura hadn’t played Sarah in the second film until I was compiling the credits for this review. Otherwise, the rest of the cast is good, and the archival footage of You Inoue is also incorporated well. 5/6

Emotional Response: This is definitely an emotionally satisfying conclusion to the series. 5/6

Overall: A very satisfactory conclusion. I’d still recommend watching the TV series over the movies, as they’re a more cohesive whole (and with the RightStuf DVD & Blu-Ray releases of the show, a little more available), but the films make for a nice shortened version of the series. 4/6

In total, Mobile Suit Zeta Gundam – A New Translation III: Love is the Pulse of the Stars gets 32 out of 42.