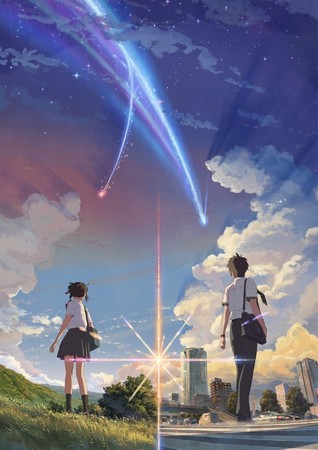 This week I’m reviewing the latest film from Makoto Shinkai, director of Voices of a Distant Star, one of the first films I reviewed for this site.

Mitsuha Miyamizu is a high school girl living in rural Japan, and Taki Tachibana is a boy of the same age living in Tokyo. They are both incredibly dissatisfied with their lives. As a comet starts approaching Earth, Mitsuha starts living Taki’s life in her dreams, and vice versa, sporadically switching bodies over several weeks. When the swapping stops, the two try to make contact with each other.

The two feeling out each others lives is really well done, with Mitsuha taking advantage of being in Tokyo to eat really impressive desserts in Taki’s body (something that culturally boys don’t normally do in Japan), and Taki ending up becoming something of a tomboy while in Mitsuha’s body.

There is a particular moment that only occurs in the subtitled version that I also liked – when Mitsuha-as-Taki is hanging out with Taki’s friends at school, she starts fumbling with the correct personal pronoun – Japanese has several personal pronouns that vary based on age and gender – causing Taki’s friends to immediately suspect something is up, while also slipping into her rural accent.

There’s a running joke of Taki feeling up Mitsuha’s breasts whenever he wakes up in her body, and it gets really old.

This movie should have gotten an Academy Award Nomination for Best Animated Feature, and didn’t.

Originality: This sort of body swap story isn’t exactly new, but Shinkai does a nice twist on the concept. 5/6

Animation: The animation in this show is great. CoMix has some great stuff, especially when it comes to Shinkai’s work. The landscapes in particular are incredible. 6/6

Story: The film is plotted really well, and the twist works out nicely, with some good clues laid to set it up in context. 5/6

Production: Again, the film’s score works great, and the background plates in the show are positively fantastic, and are some of the best backgrounds you’ll find outside of Studio Ghibli, and equal to work done by Ufotable. 6/6

Emotional Response: Makoto Shinkai is really good at getting you right in the feels. He did it in Voices of A Distant Star, he did it in “Her and Her Cat” (a short that I didn’t review here as it’s not SF), and he does it here. 6/6

Acting: The cast is great – particularly the two leads, who are basically both having to play two roles, themselves in their bodies, and the other person in their bodies. Body swap stories are, in general, something of an acting challenge, and this work nails it. 6/6

Overall: Fans of anime and animation in general should really check this movie out – it’s well executed in every respect (and I’d say it’s also probably a really good date movie). 6/6