Picks for the Fall 2009 Anime Season

The list of new anime series for the fall season on Japanese TV (they go in 4 seasons rather than 2 or 1 season per year like in the US), are now up. I’ll be putting the list below the cut (courtasy of OtakuDan.com), and my picks for the shows that interest me. 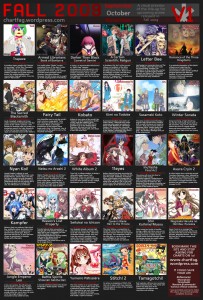 For the record – I don’t like the name of the site that OtakuDan got the listings from, but I can’t find the listings from anywhere else.  *sigh*.  Anyway, I clicking on the picture will get a more legible version of the listings – I just shrunk it down for page with purposes. On to my picks.

So, for those people who do watch anime on the site, do any of these shows catch your eye? Do you agree with my choices or are there some of my choices you’d pass on?