The aircraft carrier, USS Enterprise (CVN-65), went officially inactive on December 1 after over 50 years of active service in the US Navy. She is the second oldest ship in the US Navy, after the sailing ship Constitution.

Originally scheduled for decommission in 2015, she was retired early to make room in the fleet for the USS Gerald R. Ford. You can reread that previous sentence all you want, it won’t change, they are naming a ship after President Ford. 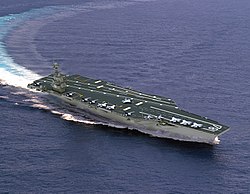 But, the good news for naval enthusiasts and Star Trek fans alike is that the US Navy won’t be long without a “Big E” in the fleet. During the inactivation ceremony, the Secretary of the Navy made a surprise announcement: The next carrier under construction (CVN-80) will carry the honored name of Enterprise.

So, for the super-Lucas-level-special-edition versions of TNG, will they add another model to the conference room wall?

4 replies on “Saying Goodbye and Hello to the Enterprise”