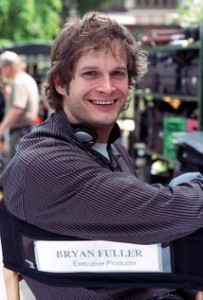 Bryan Fuller, who got his start by submitting a script to the producers of Deep Space Nine, will be the producer for the new Star Trek series, debuting on CBS’s online service sometime next year.

He wrote a couple of episodes for DS9 and twenty-two episodes for Voyager (good ones, too). He’s also the man behind Wonderfalls, Dead Like Me, Pushing Daisies, Heroes, and Hannibal. I’m not sure when he’ll have time to sleep as he’s also starting up a new version of Amazing Stories and a series based on Neil Gaiman’s “American Gods.”

You’ve given me hope. Damn you! Now I might care how this thing goes. Before, I could armor myself in the indifference so common to Star Trek fans post-Enterprise. But now? Now you’ve put a perfectly competent individual (who loves the source material) in charge.

You push us away, then reel us back in. My emotions can’t handle this! And the fact that none of his series seem to last more than a few seasons before being cancelled (despite being brilliant) does not do my heart any good.