The wait is over… 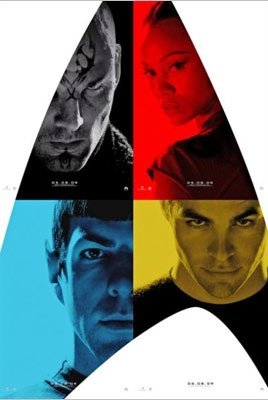 A Romulan captain, Nero, returns from 120 years in the future to exact his revenge on the man he feels is responsible for the future destruction of his homeworld.  Meanwhile, Kirk, McCoy, and the rest of the crew, just out of the Academy must crew the newly built USS Enterprise, under Capt. Pike, and try and stop Nero before he destroys the Federation.

This movie hits on all cylinders. Even before the main cast takes the stage, you’re emotionally hooked in. Then you’re hit with an epic title reveal that seems to say “We know you’ve missed Star Trek…”

There’s a genuine love of the source material here. The score is completely different, yet sounds like Star Trek. The tech looks like Trek, just slightly modernized. And the characters are the ones we know and love, yet are different…more intense. Like it’s concentrated Kirk, Spock, McCoy, and all the rest. And it’s a very good thing.

Make no mistake, this is a “reboot” of Star Trek, the story is starting over with just a link to the old Trek. But the reboot makes sense (in the universe of Star Trek) and the new direction is good.

Well, it’s a remake, but not quite, so it only takes a little hit on originality.  It’s still creative about how it’s reinventing itself and sets the stage for a new franchise to be born. 4/6

The story was riveting, with a fair number of turns along the way you don’t really see coming. It’s fast paced, but it’s still Star Trek.  5/6

This new cast has done a fantastic job of characterization. They have obviously studied their predecessors, but still breath fresh new life into them. And Mr. Koenig, please pay close attention Mr. Yelchin’s speaking. That’s a Russian accent. 6/6

The production quality is top-notch. About the only thing I’m going to ding it on (and it sounds dumb unless you’ve seen the movie) is to settle down on the freakin’ lens flare J.J! We know the bridge is bright, but damn. You could go blind serving an eight-hour shift in there. And it’s not just the bridge, but that’s where it gets most annoying, since you should be more interested in the subtle details of the actor’s faces and performance. 5/6

This is a beautiful movie and the effects only serve to enhance it (even with too many lens-flares). The new-ish Enterprise is stunning. Also, I love the new warp effect. And I liked the old one. The new one makes warp seem a lot more dangerous. 6/6

I’ll admit to a little fan-boy excitement for this movie, but I still was moved by certain scenes and laughed out loud at all the jokes. Also, the reboot leaves you wondering about the outcome (unlike other prequels), so there is a genuine sense of tension. All told, there is a phenomenal emotional response to this movie. So good, the audience applauded and cheered as the final credits rolled. 5/6

Overall, I had a great time. As a Star Trek fan I am pleased as punch with this film. There are a ton of little gags for just the fans. I think non-fans will enjoy the heck out of this movie as well. You don’t really need a past frame of reference to enjoy the film. 6/6