Is it December yet?

END_OF_DOCUMENT_TOKEN_TO_BE_REPLACED

Because 2016 just hadn’t crushed us enough…

Carrie Fisher, best known for her role as Princess Leia in the original Star Wars trilogy and the recent sequel, The Force Awakens, has passed away. She suffered a heart attack on December 23, while on a flight from London to Los Angeles. She was 60 years old.

In addition to acting, Fisher was a prolific Hollywood writer, known for her sharp wit and quick tongue. She was touring the nation, promoting her new book, The Princess Diarist, which was made up of her journal entries during the filming of Star Wars.

She was open about her struggles with her weight during Star Wars and her later addictions with drugs and alcohol. Her book (and screenplay) Postcards from the Edge, are a semi-autobiographical look into her life.

Fisher’s take on Leia created a whole new archetype of a tough woman in Science Fiction. Not quite the damsel in distress, she was a strong leader that gave a generation of geek women someone to look up to (and geek men to admire).

She is now one with the Force, but we will never forget her.

[Update] Sadly, a day after Fisher’s death, her mother, Hollywood legend, Debbie Reynolds has also passed away. She suffered a stroke while at her son Todd Fisher’s home while planning Carrie’s funeral. She was 84 years old.

Reynolds was a fixture of Hollywood musicals in the 50’s and 60’s and starred alongside Gene Kelley in the classic Singin’ in the Rain. She was nominated for an Academy Award for her portrayal of Molly Brown in the film version of the musical, The Unsinkable Molly Brown.

Our thoughts and prayers go out to the Fisher family.

END_OF_DOCUMENT_TOKEN_TO_BE_REPLACED

The first of the “Star Wars Tales” series of films is out in theaters – telling the full story behind those two sentence in the opening crawl from A New Hope – “Rebel spaceships, operating from a secret base, have struck their first victory against the evil Empire. During the battle, Rebel Spies managed to steal plans to the Empire’s secret weapon…” END_OF_DOCUMENT_TOKEN_TO_BE_REPLACED

I have a good feeling about this.

The latest trailer premiered last night during the Olympics (at least it did here in the States). It shows a little more of the story and lot more of the characters.

Nice timing, Disney. With everyone re-discovering The Force Awakens from the comforts of their own homes, the studio follows up with our first real look at the stand-alone Star Wars story. 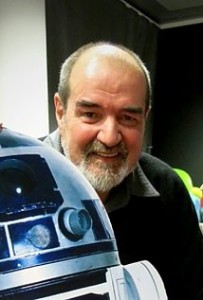 Disney has announced that Star Wars VIII will be delayed to December 2017, rather than May 2017. It sounds like they want extra time to work on the film, but also it means that the film could be another financial juggernaut with so little competition for sci-fi/action crowd. Personally, I kind of like the idea of Star Wars being a Christmas tradition (Rogue Squadron is due December of this year). It also means Disney won’t be pitting it against its other big money franchise, Marvel (in the form of Guardians of the Galaxy, Vol 2).

James Cameron’s long-gestating Avatar 2 was scheduled for December 2017 but has now been pushed back to an unspecified date. The official word is that they want to get it just right. Frankly, I don’t think a whole lot of people are going to flock to the theaters to see a second Avatar film. The novelty of 3D is waning and it’s not like you hear folks wondering about whatever is going to happen next to the characters. The most logical next step is that the military returns, blasts the planet from orbit and then send in an overwhelming force to clean up what’s left.

You came here to watch and/or comment about the new Star Wars: The Force Awakens trailer. So let’s get right to it.

END_OF_DOCUMENT_TOKEN_TO_BE_REPLACED

The Hollywood Reporter, among other sites, is reporting that actor, WWII veteran, and musician Sir Christopher Lee has passed away at the age of 94.

It is, frankly, hard to tell what he’ll be best known for playing. Maybe it’ll be as Count Dracula in Hammer’s horror films. Maybe it’ll be as Saruman in the Lord of the Rings and Hobbit trilogies. Maybe it will be for his performance in the original The Wicker Man. No matter what particular roles he’ll be remembered for – he was one of film’s most iconic actors, and like other horror legends like Boris Karloff and Vincent Price, his work will stand the test of time long after his passing.