A group of doctors in California adapted the hit musical’s song “My Shot” into an anthem on COVID-19 vaccines. The group calls themselves Vax’n 8, and they spent months working on the remix.

SpaceX’s historic launch should take place this afternoon. Here’s some information on how to watch the launch and subsequent events: 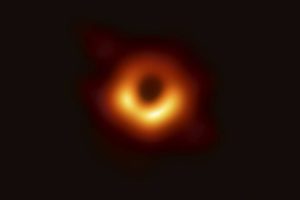 At six simultaneous press conferences around the globe, astronomers on Wednesday announced they had accomplished the seemingly impossible: taking a picture of a black hole, a cosmic monster so voracious that light itself cannot escape its clutches.

This historic feat, performed by the Event Horizon Telescope (EHT)—a planet-spanning network of radio observatories—required more than a decade of effort. The project’s name refers to a black hole’s most defining characteristic, an “event horizon” set by the object’s mass and spin beyond which no infalling material, including light, can ever return.

No, this isn’t a video by me. Chad Cloman passed along a very nice video where Jorge Cham and Daniel Whiteson of CERN explain, for those who don’t know, what the Higgs Boson does, and how it affects our view of the universe.

END_OF_DOCUMENT_TOKEN_TO_BE_REPLACED

MESSENGER, the first human probe to orbit the innermost planet, has sent back its first photo from orbit.

END_OF_DOCUMENT_TOKEN_TO_BE_REPLACED

For the first time ever, a man-made probe has entered into orbit  around the Sun’s closest neighbor.

END_OF_DOCUMENT_TOKEN_TO_BE_REPLACED

For those following Science news, you may have heard that NASA was planning on making a big announcement today about… something. Something astrobiology related. Well, those spoilers of all things spoilerriffic at Gizmodo have spilled the beans again – NASA found life different from life as we know it on Earth, organisms that use Arsenic instead of Phosphorous in their molecular structure. END_OF_DOCUMENT_TOKEN_TO_BE_REPLACED